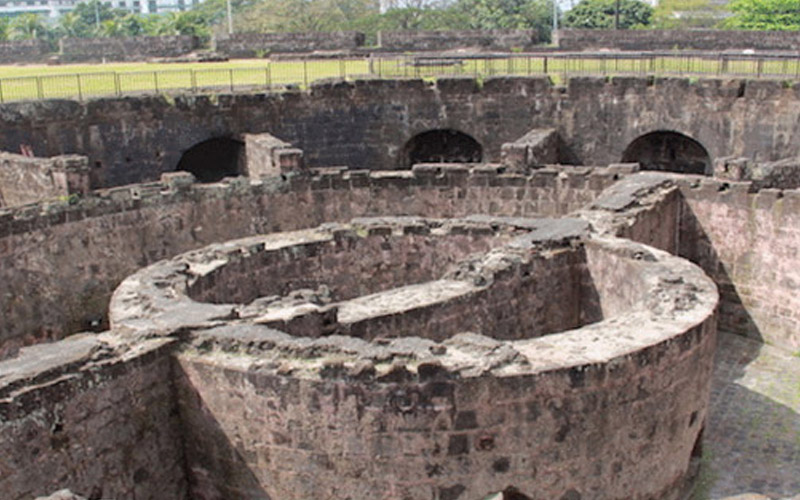 When it comes to historical landmarks in Manila, there’s nothing that comes close to Intramuros. During the Spanish era, Intramuros was the seat of government and center of religion, education, and economy. Today, it’s mostly a tourist attraction that is directly supervised by the Intramuros Administration– not the city government of Manila. For all intents and purposes, it is still considered a city within a city.

Situated within its walls is Fort Santiago, a citadel that was built by Miguel López de Legazpi upon his arrival in Manila. A close “cousin” of this defense fortress is Fort San Pedro in Cebu, which was also used by Legazpi as a military defense structure. Today, Fort Santiago is teeming with tourists trying to squeeze in a one-day itinerary to get a glimpse of the old structures that were once prominent during the Spanish era. Here are some of the most important details about Fort Santiago that should give you that “aha” moment once you visit:

It was named after the Saint James, the patron saint of Spain, who is also known as Saint James the Muslim-slayer because of the legend that he miraculously appeared hundreds of years after his death to fight in the mythical battle of Clavijo. The facade of Fort Santiago showcases the image of Saint James right above the Coat of Arms of Spain.

It was built by Miguel López de Legazpi, Governor-General of the Spanish East Indies which included the Philippines and other Pacific islands, namely Guam and the Marianas Islands.

Born into a noble family in 1502, Legazpi was a Spanish explorer and conquistador who led the Spanish expedition in search for the Spice Islands (now known as the Maluku Islands in present day Indonesia). His 1565 expedition visited Guam on its westward voyage from New Spain (Mexico) to Cebu in Central Philippines.

He eventually became the first Governor-General of the Spanish East Indies which included the Philippines and other Pacific archipelagos– Guam and the Marianas Islands.

Aside from Fort Santiago, he is also behind the construction of Fort San Pedro, the military defense fortress in Cebu City. His remains is currently housed at the San Agustin Church inside Intramuros, Manila.

Approximately 600 American prisoners of war died of suffocation and hunger in its dungeons after being caged in extremely tight quarters. The filthy water of the nearby Pasig River also seeps in during high tide leaving its ground damp most of the time.

The marker installed by the Intramuros Administration in the entrance of the dungeons
Jose Rizal, the national hero of the Philippines, spent his last days holed up in Fort Santiago before being marched off to Bagumbayan (now Rizal Park) where he was executed by firing squad.

Its location was once the site of a palisaded (wooden) fort of Rajah Matanda, a Muslim Rajah of pre-Hispanic Manila. The old fort was eventually destroyed by Martin de Goiti, the leader of the Spanish expedition in Manila as ordered by Legazpi in 1569.

The first fort that the Spaniards built was made of palm logs and earth. Most of the structure was destroyed when Chinese pirates led by Limahong invaded Manila. After a fierce battle to control the city, the Spaniards eventually drove the pirates out north in the province of Pangasinan, and out of the country.

The hard stone used for the construction of Fort Santiago was quarried from Guadalupe(now Guadalupe Viejo in Makati City).

The front gate of Fort Santiago was built in 1714 along with its military barracks.However, the Luzon earthquakes of 1880, which destroyed scores of buildings and churches, also destroyed the front edifice of the fort.

On August 13, 1898, the American flag was raised in Fort Santiago symbolizing the start of the American rule in the Philippines. The Fort served as the headquarters of the US Army, and among the changes they made included the draining of the moats and the transformations of the grounds into a golf course.