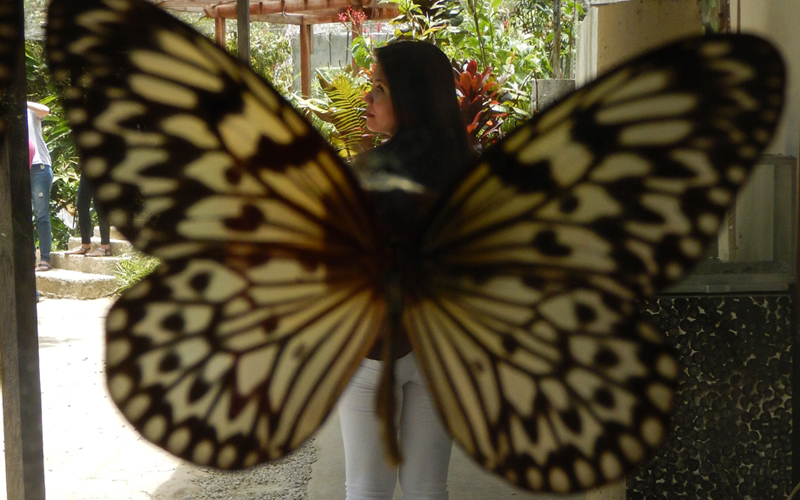 Bohol Buttefly Sanctuary have been established by butterfly enthusiasts and are now gaining recognition. There are more or less 300 butterfly species native to the province and the sanctuaries are aiming to conserve and raise the butterfly population in the island.

Breeding butterflies can augment ones income by selling them as butterfly releases, making them into dry papered butterflies and selling live pupae. Moves have been taken to develop butterfly by-products such as framed butterflies, butterfly wing mosaic, and key chains.

What is a Butterfly?
According to Wikipedia, a butterfly is an insect of the order Lepidoptera. Like all Lepidoptera, butterflies are notable for their unusual life cycle with a larval caterpillar stage, an inactive pupal stage, and a spectacular metamorphosis into a familiar and colorful winged adult form. Most species are day-flying so they regularly attract attention. The diverse patterns formed by their brightly colored wings and their erratic yet graceful flight have made butterfly watching a fairly popular hobby.

Butterflies comprise the true butterflies (super family Papilionoidea), the skippers (Super family Hesperioidea) and the moth-butterflies (Super family Hedyloidea). Butterflies exhibit polymorphism, mimicry and aposematism. Some are known to migrate over large distances. Some butterflies have evolved symbiotic and parasitic relationships with social insects such as ants. Butterflies are important economically as one of the major agents of pollination. In addition, a number of species are pests, because they can damage domestic crops and trees.

Other Butterfly Facts
Adult butterflies do not go to the bathroom. Caterpillars do all of the eating and almost continually defecate. Occasionally adult butterflies drink so much they must emit a fine liquid spray from the tip of their abdomen but it is almost pure water.

Butterflies do not eat bugs or any other insects. Only the caterpillars do most of the eating and they only eat plant parts except for the Harvester butterfly of the eastern U.S. that eats wooly aphids. Adult female butterflies lay their eggs in the middle of aphid masses.

Adult butterflies and moths eat only various liquids to maintain their water balance and energy stores with a few exceptions. Most of them sip flower nectar, but others get the necessary fluid from rotting fruits, sap flowers on trees, bird droppings, or animal dung. Adults of Harvester butterflies can pierce the bodies of woolly aphids and drink their fluids with their short proboscis or tongue. The caterpillars of the Harvester butterfly and its relatives feed solely on aphids.

With regards to mating, male butterflies find females by sight, and use chemicals called pheromones at close range. If the female accepts the male, they couple end to end and may go on a short courtship flight. They may remain coupled for an hour or more, sometimes overnight. The male passes a sperm packet called a spermatorphore to the female. The sperm then fertilize each egg as it passes down the female’s egg-laying tube.

Butterflies do not communicate like honeybees but they use some of the same kinds of communication. Butterflies can communicate with each other [same or different species] by color, chemicals, sound, and physical actions. Color patterns are used to signal their sex or species to each other. Chemical pheromones are used by both sexes of some butterflies to attract the opposite sex or to signal species identity in courtship. A few butterflies make clicking sounds [males of genus Hamadryas] to protect their space. Some chrysalides [gossamer wings family] make clicking sounds to attract ants that in turn protect them. Physical actions such as aggressive flight or postures are used in courtship or to protect resources such as an important flower. Caterpillars of some species produce sugary substances for ants which in turn protect the caterpillars.

Butterflies have strong muscles in their thorax which force their wings up and down on a fulcrum basis. They actually go in a slanted figure 8 motion that propels them forward through the air in the same principle as an airplane. Slow flying butterflies probably fly 5 mph or a little more. Some fast flying skippers can fly 30 mph or faster. During fall migration migrating Monarchs have been seen flying by tall buildings such as the Empire State Building at 1,000+ ft. Butterflies are picked up by storm fronts and moved 100’s of miles, probably at altitudes of several thousand feet.

When butterflies cannot keep their temperatures at activity levels, when it’s cloudy, or at night they become quiescent or inactive. This quiescence, or resting, is not equivalent to human sleep. Butterflies always have their eyes open, since they do not have eyelids and they probably do not dream.

Butterflies hide when it rains. They usually go to the same places they do for the night. Some butterflies hide under large leaves, some crawl down into dense leaves or under rocks, and some just sit head down on grass stems or bushes with wings held tightly. Others die or their wings become tattered if the rains are exceptionally hard or of long duration.

The full-grown caterpillars usually wander off the plant some distance to find a place to make their chrysalis. During the feeding and growth stage they just remain under leaves.

Some butterflies only live for 2 weeks! Generally, their life span is just two months. All butterflies use host plants to lay their eggs on, which are usually suited to their coloring.