DO YOU LIKE CHOCOLATE? YOU WILL LOVE THE CHOCOLATE 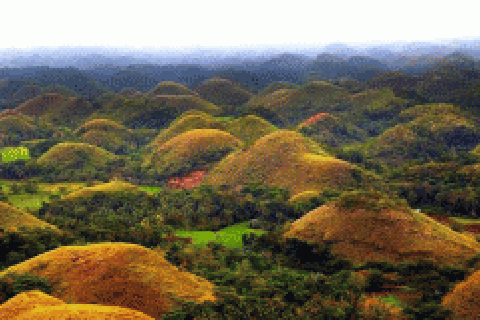 The Chocolate Hills are probably Bohol’s most famous tourist attraction. They look like giant mole hills, or as some say, women’s breasts, and remind us of the hills in a small child’s drawing. Most people who first see pictures of this landscape can hardly believe that these hills are not a man-made artifact. However, this idea is quickly abandoned, as the effort would surely surpass the construction of the pyramids in Egypt. The chocolate hills consist of no less than 1268 hills (some claim this to be the exact number). They are very uniform in shape and mostly between 30 and 50 meters high. They are covered with grass, which, at the end of the dry season, turns chocolate brown. From this color, the hills derive their name. At other times, the hills are green, and the association may be a bit difficult to make.

Legend has it that the hills came into existence when two giants threw stones and sand at each other in a fight that lasted for days. When they were finally exhausted, they made friends and left the island, but left behind the mess they made. For the more romantically inclined is the tale of Arogo, a young and very strong giant who fell in love with an ordinary mortal girl called Aloya. After she died, the giant Arogo cried bitterly. His tears then turned into hills, as a lasting proof of his grief.

However, up to this day, even geologists have not reached consensus on how they where formed. The most commonly accept theory is that they are the weathered formations of a kind of marine limestone on top of a impermeable layer of clay. If you climb the 214 steps to the top of the observation hill near the complex, you can read this explanation on a bronze plaque.

Considered sometimes as the “Eight Wonder of the World”, the Chocolate Hills has been declared as the country’s 3rd National Geological Monument by the National Committee on Geological Sciences on June 18, 1988 in recognition of its special characteristics, scientific importance, uniqueness, and high scenic value; and as such is among the country’s protected areas.

What’s unique with these limestone chocolate hills is that they are only covered in grass and the cone shape is more or less common to all although differing in size. The hills look chocolaty only during dry season when the grass withers and turns into brown and looks like giant chocolate kisses.

Grass species found to thrive on the hills are Imperata cylindrical and Saccharum spontaneum and several Compositae and ferns. Trees grow on the base of the hills and are lush and verdant rings around the almost bare cone-shaped hills resulting in its awesome natural beauty.